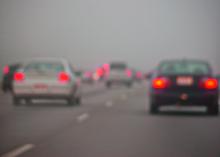 Recently, there was a fire in an industrial area of Phoenix.  It was a huge fire, and it required over 100  Fire Fighters to respond.  There were explosions and thick black smoke that was seen from all over the valley.  This fire was near two very heavily traveled freeway overpasses.  Traffic was flowing normally when the fire broke out.  That quickly changed as the smoke became so thick that they had to limit the lanes of traffic that could proceed.

I had a dear friend who was stuck in this traffic in the early afternoon.  To say she was anxious to get out of the mess would be an understatement.  There was nowhere she could exit as she was on the overpass.  This is what she shared with me about her experience.

As I got on State Route 51, I started to see smoke but had no idea I was going to end up close to it!   When I got on the I-10, it looked closer, but I still had no idea exactly where it was.  It wasn't until I got past the 7th Ave exit that I was starting to wonder how close it actually was to the freeway.  I was about to pass the fire (it was alongside the freeway) when I saw a HUGE explosion!  It seriously looked like it was directly under the freeway.  I thought the freeway would come down.  I called my husband in a panic and told him I loved him.  I could see the fire crews working hard.  The I-17 was closer to the fire, so they moved traffic to join the I-10, which was a mess as well!

I know that fires can be  unpredictable and that explosions can catch other buildings on fire, so I was really wanting to escape from there.  Being stuck is an awful feeling.  I prayed and prayed for the fire crews.  Once we were close to the fire, the traffic started moving!  I think the other drivers wanted to escape as well!  Once I was past, I felt instant relief!

While approaching the fire, I turned off the airflow and kept the windows up.  I was actually shocked that I couldn't smell smoke at all.  I had Rerun (my four-legged kiddo) with me, so I worried that if I had to get out and run, where would we go.  I was panicked, yet listening to my music and trying to stay calm, I only worried about what I could control, which was not wrecking!  I also learned people can't drive during a panic event.  They cut people off, don't let other cars over,  and they take pictures instead of focusing on driving.  I did take a picture, but only when stopped!  I thought people would pay more attention!  The medical and fire crews were busy and an accident on the freeway was not needed.”

My dear friend is not accustomed to preparing like I am.  Therefore, this was a revelation for her.  I love her observations though.  During fires or situations like this, where many of our first responders are busy with a more pressing emergency, you do need to be aware of what is happening around you.

As a driver, we should always be aware of our surroundings.  My friend said it perfectly, “people can’t drive during panic events, and they don’t let you over.”  While driving, one should have a plan in mind as to where they are going to steer their vehicle in case a collision happens in front of them, to the right or left of them or even behind them.  Instead of zoning out while driving, we need to be mindful of who is on the road around us.  Do you have a safe distance to stop or get out of the way?  How are you going to avoid being in a collision?  There are places that teach defensive driving techniques, and it is a course some may desire to take.  In the meantime, I make sure to give myself plenty of distance from other vehicles when driving.  A person should always be scanning all of his/her mirrors to see who is around them and checking their blind spots.  Know your vehicle's blind spots and give yourself time to react to unsafe conditions.  During heavy traffic be the one that always has a safe breaking distance from the vehicle in front of them.  If you are like me and have a big truck give yourself extra room.

The other thoughts about preparedness that came to mind while I watched all of this on the news were as follows.  First in your glove box or in a kit in your car, you should have enough N95 rated respirator masks for the maximum number of persons that can travel in your 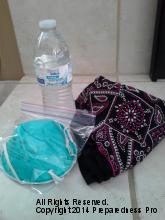 car.  I like the ones that have the valve respirator in them.  You should have bandanas and water bottles also, as a minimum.  Why? You do not want to breathe that mess in if you have to exit your vehicle and get away from a fire on foot.  Do you recall all those people who were seen on TV leaving the mess of 9/11/01?  They were all asking for water to wash their skin, moisten their throat, and rinse their mouths out.  That is when the water bottle and bandanas can help you.

If you are a diligent prepper, you have a 'get home bag' in your car.  When putting a bag together the items mentioned above should be the first things you put in your car kit.  Some of you may be saying, “I have that in my trunk with my kit.”  The trunk of your vehicle is too far from you and involves more messing around to retrieve it - You need it inside your car.  If you want to be extra prepared, place a set inside the glove box or in a small shoe sized box in the back seat.  A bright vest, inside your car, to throw over you could come in handy as well.  That way you can put it on when you exit your vehicle if there is heavy smoke, it is dark or anytime when on a road and you want to increase the likelihood you will be seen and not mistakenly being hit while exiting your vehicle.

The second thought that came to mind while watching this fire unfold was that if someone worked in that area, what is in their “get home bag” at work.  The fire chief said they had evacuated the surrounding areas because of the smoke.  He told the media they were lucky that the vortex of the smoke rose up like it did.  The department was concerned that the smoke would linger in the streets and surrounding buildings because they could not get close enough to find out what exactly was burning.  There were concerns that there might be toxins.  In a person’s get home bag, you should have the N95 mask, flashlight, water bottle and bandana as well as numerous other items.  A bright vest would be good to have in there as well if you want to be seen.  There will be those of you who will not want to be seen.  I do not always want to either, but I have it as an option in case I am injured and need help.

Lastly, the thought came to me about my friend's statement, “this is not the time to have an 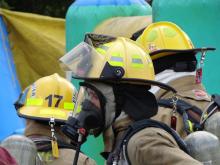 accident, and all of the first responders are busy.”  She is right!  During a time like this, will I be the one to stand up and help others get to safety or, will I be the reason someone else needs a first responder?  I would like to be someone who is able to get my family or myself to safety as well as possibly helping others reach safety.  My Dad once told me when I was learning to drive, “do not look at the accidents as you drive by.  You may see something you do not want to see.”  He told me to say a prayer and pay attention to what is going on around me.  Once I did not heed his advice, and I saw something I did not want to see.  I said a prayer for the parties involved and myself.  I now pay attention to the situations around me and that has saved me from a number of collisions.  Now I hear myself telling my kids the same thing while we are in the truck.

Each of us prepares differently; however, checking your kits to make sure they are okay and that you have what you need is smart.  Remember, take the time to look at the news reports to help you think of ways you would survive that situation.  What would you do differently?  How would you protect your children if this happens while you are driving?  Practice!  Even if it is in your front yard, practice getting your gear on and getting out of the car.  Belongings can be replaced, lives cannot!

I do not have a bug out bag because, with the exception of a forest fire when I'd head to relatives, I am exactly where I want to be in case of a natural disaster or SHTF scenario. However, a get home bag makes really good sense. Which reminds me of a story. Several years ago, I was making the 700 mile trip to visit my parents. I never used to buy or use bottled water, but when I stopped in at a gas station, they had cases on sale and I bought one. 50 miles from my parents home, on one of the hottest days of the year, I got caught in a traffic jam that lasted several hours. Just stuck on the highway with nowhere to go. Even warm water was good and I poured a couple bottles over my head to cool off. Now I never go anywhere without water and will add some of the other things you've mentioned because I don't want to bug out but I do want to get home.

Great suggestions I had not thought of, the masks and vest. Done! Thanks, as always.

I just read your excellent detailed article on water filtration, pay attention to the nines, I was wondering about the respiratory mask N95, I just clicked on the link to amazon and seeing some of their descriptions...I'll admit due to the hour I've not looked carefully but was curious if you have one you'd recommend that would protect from an event such as this or worse? I know you mentioned respirator included, but I saw something mention oils on amazon but not smoke...unless I missed it? Thanks for all your info. Being prepared takes an incredible amount of research for a lot of things out there, at least when you are on a tight budget like I am!