A reader asks a question about preserving candy without a FoodSaver:

Question: "Hi Kellene, Your site helps me so much, thank you. I know you preserve chocolate and candy. Can I do that with oxygen absorbers in mason jars? if so, should they be unpackaged, like M&Ms? I don't have a foodsaver. I also would like to preserve hard candies. How long will they last under the right temps/conditions? just approx...thank you so much!"

Answer: Yes, in the absence of a FoodSaver you can still get more life out of your treats such as those you've mentioned here by using oxygen absorbers and Mason Jars.  While you won't get 5 to 8 years, you can still expect to get 3 years so long as you store them in a cool, dry, place.

You don't need to open the package though if you don't want to. Oft times I leave the items in their original packaging so that I can have the information on them, and "best by date" as well as the production number in case there's ever a recall. Sometimes I merely do a pin prick into the packaging and then use my FoodSaver. But in your case, as you're doing it without a FoodSaver, I don't believe the pin pricks would do you any good so, if you can, just preserve them with the oxygen absorbers.

Lastly, I've had a LOT of success finding used FoodSavers online in local classifieds as well as Craig's List, e-bay and even Amazon. But remember, you've got to get a model that actually comes with an air port and you'll also need two jar adapters to properly expel the oxygen. Some of the FoodSaver kits include one of them and some don't. You can find the jar attachments on Amazon or at the manufacturer's site, FoodSaver.com  (By the way, you'll see the brand name "Tilia" on the FoodSaver items. It's officially their brand but they are better known as "FoodSaver".  Also, when you're looking for the jar attachments, be aware that you'll want the "regular" size attachment as well as the "wide-mouth" size attachment. I find that when it comes to my dry canning, I use the wide-mouth Mason jars the most.

Anyway, back to what I was saying... you don't need to purchase a new FoodSaver right off the bat; used is better than nothing. However, understand that there are some pieces of equipment that I won't skimp on such as pressure cookers (Kuhn Rikon/Duromatic is the ONLY brand I'll purchase), pressure canners (All-American or nothing for this gal) or solar oven (it's one piece of equipment I prefer to get new and I specifically purchase mine from Costco so that I can take advantage of their guarantee.  In fact, I just recently benefited from this strategy. 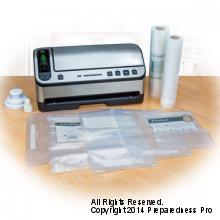 I purchased a brand new FoodSaver 11 months ago from Costco, but after 11 months it stopped sealing all the way on a consistent basis. So I was able to take my old one back to Costco and exchange it right across the board for the newest model that Costco carries. No hassle, no additional money required from me. Nothing. It was super duper easy and I've only found the FoodSaver to be the kind of quality that can keep up with my heavy and frequent use. I''ve never had a FoodSaver kick the bucket so soon on me; thus I believe this was a fluke. But it was well worth the money to purchase it new through a retailer that will back it up for an entire year after the fact AND without a receipt. Now I have the newest, fancy schmancy model (Model 4880 2-in-1) and I'm actually having FUN prepping.  Yep, I'm actually giggling as I use it. So, I'd suggest you at least put it on your Wish List.  The amount of money that I've been able to save as a result of the use of my FoodSaver has paid for that prepper toy several times over in the form of eliminating most of my food waste, enabling me to keep foods longer so I don't have to be shy about purchasing them in bulk to save money, over-the-counter drugs--which have an average shelf-life of 66 months according to a joint study between the DOD and FDA a couple years ago, and my vitamins are able to keep their potentcy WELL past their expiration date also.  So, while it may not be feasible for everyone to purchase a FoodSaver right now, it's definitley worth pursuing for an ideal peaceful preparedness scenario.

One other thing to warn you about though... don't purchase the hand-held FoodSaver System. FoodSaver will even tell you that it's not intended for long-term sealing.  You may think you have a seal when you put things away, but it will gradually weaken and then you risk all kinds of problems--most you can not see with the naked eye.

Hope this helps you! Good luck with your dry goods canning!

You don't need a foodsaver... Go to HarborFreight pick up a brake bleeder, and use the food saver jar sealer top... it works better then the vacuum sealer and costs about $14.00.

There's a video of someone using a brake bleeder manual pump to vacuum the air out and the food saver jar sealer top on youtube. It works great without electricity. Search on youtube for "Tenth Acre Farm" to see it.

I've found the jar sealing attachments several times at estate sales - never have found a foodsaver in those same houses. They can be found for around $10-$15 on eBay.

Yes I agree the food saver is the best method to save sweets for storage. The only candy I found that did not fare well was hard candies. After about 2 years the outsides of the candy go tacky and chewy. Regular candy bars did well however,especially the little miniatures (Trick or treat size) that you could cram into a quart Mason jar. The full size chocolate bars, Paydays and other bars with nuts did equally well in food saver bags and were easier to store. I can't say enough good things about a Food Saver investment. The bags are expensive, but can be washed and used multiple times if they are treated carefully.

Since I truly believe the next, most worthy appliance is a good pressure cooker Kellene, I might suggest you repeat the benefits of owning and using them. It is an item that allows you to save energy, time, changes the way you think about food storage and has many uses. You got me started a few years ago and I greatly appreciated your information.

Perhaps you're new with us, Crisco. Welcome. You're not likely to find a more ardent lover of the pressure cooker than myself as you will find if you take a trip over to our videos on Youtube.com/preparedness or a myriad of articles on here. Simply put in "pressure cooker" in the search bar. Also, I've not found your experience with hard candies to be the same. Mine still are dry and not tacky after more than 8 years now. I believe the humidity of one's storage environment to be critical to that result.

Just curious...how do you use the food saver to preserve OTC meds? I have put bottles of aspirin, vitamins etc. in the food saver bags & sealed them, but could liquids or other packaged items be better preserved in jars?

Kellene, thanks for all the valuable info; I have learned a LOT from you! I have a question related to vac-sealing jars.. I am trying to prep mainly considering a lack of electricity one day. I have found a product called a "Pump-N-Seal" that is totally hand operated. While I use my vac unit on my Food Saver now, I expect to need to do things off grid. Have you ever used a Pump-N-Seal? If so, what kind of results did you have? Thanks!

I have one. It works super, doesn't require electricity, and doesn't take up counter space. Doesn't take a lot of effort either, my 2 year old sealed a jar without any trouble.

If you were to call that company they would tell you that they are NOT recommended to be used for long-term storage. The seal basically weakens over time.

I was just watching you on Doomsday Preppers and am wondering when you might come out with a prepper cookbook? Sure would love to have one. Thanks and much love .

I've been trying to finish it now and self-publish it for nearly 2 years now. I just keep running out of time with keeping the blog and our FB page updated along with earning a living. Funny how "free" info doesn't pay the bills, dang it. ;-) I really hope to have it out by year's end though and it looks like it will happen!

I really appreciate your thoughts on the oven canning method. I wondered the same thing myself about the heat and oxygen.

I'm also wondering if the diatomaceous earth changes the flavor of the food. What foods do you recommend using it with when dry canning?

No. DE doesn't change the taste. in fact, I drink it daily and it's quite tasteless. I use it in any dry grain, seed, or legume that I'm storing.

I keep seein here that is sing DE is good for dry grains, but no one mentions how much to use in pint jars, quart and gallons jars. And how to you use it? Just sprinkle on top of grains or does it require me to thoroughly mix throughout the jar? You can tell I am a newcomer. :(. Trying to learn here. Thanks

I keep my DE in 5 gallon buckets. When using it in quarts or pints or even other sized jars, I just do a sprinkling in the middle and on the top and give it a gentle shake and then put it up for storage. All is well thus far with that method.