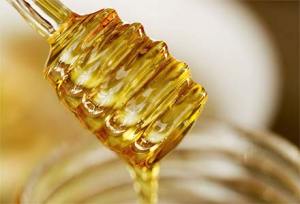 My drug of choice?  Well, I could say chocolate, or a Dr. Pepper, or even a sweet kiss from my hubby (those make my knees buckle).  But there’s nothing like a small spoonful of honey to put me in a happy, delicious mood.  Seriously.  Perhaps it’s because each time I steal a taste, I’m not just tasting the substance of honey, but its overwhelming value everyday, and in an emergency.  Honey not only tastes good, but it has numerous medicinal and comfort uses as well.  You know me, I love items that have multiple uses.  Honey is one of the super stars of my food storage AND first-aid supplies.

For starters, honey has an infinite shelf life.  As an emergency preparedness pro, I LOVE items that have an infinite shelf life.  Even if it hardens and is crystallized, it’s still perfectly good.  All you need to do is warm it up if you’re using it to drizzle on your toast.  I frequently just dump my “crystallized honey” directly in my bread dough without heating it up again.

But there’s more to the reason why honey was bartered just like silver and gold was for centuries and long considered a nectar to the gods.  Honey is rich in history of medicinal uses.  Researchers believe that it’s as a result of its many medicinal uses why honey was found in many catacombs and pyramids.  (Along with wheat, of course, that was still good.)  History has recorded honey as being the most widely used medicinal substance—particularly in the annals of Egypt.  Even during the First World War, it was used mixed with cod liver oil to treat wounds.

Honey is also an antibacterial agent.  The reason being is that it has low water content and high acidity content.  Bacteria and microorganisms can’t flourish and grow in honey.  Thus it’s a lot like hydrogen peroxide.  Mind you, the HP is a heck of a lot less expensive if you were going to use it specifically for that purpose, but HP can actually irritate and even burn some skin tissue.  It’s interesting to note that honey and hydrogen peroxide are actually closely related.  Why?  Because honey also contains a substance called glucose oxidase.  When combined with water and oxygen, glucose oxidase forms gluconic acid and hydrogen peroxide.  Yup.  The very same stuff that you can get for a buck a bottle at the pharmacy. This reinforces the antiseptic effect of honey but is less damaging or irritating to skin tissue.  But, I also look at the health benefits of the food I feed to others in which I used honey.  Consider that I’m feeding and fighting at the same time. 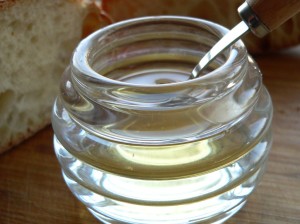 If you have allergies, ingest honey from local farmers.  It will help you develop resistance to the nasty pollens that are flaring up your allergies in the first place.  The interesting thing is when you combine honey with water (such as for a sore throat) it produces the NECESSARY bacteria for human health, not the yucky bacteria (yes, I just said “yucky).  Unlike hydrogen peroxide though, honey is actually very good for burn care and is definitely less expensive than the other burn treatment contraptions out there.  There are bacteria in the digestive system that are actually aided by the chemical make-up of honey.  This is why you may have heard of honey helping with colitis symptoms as well.

As a food, honey is one highly underestimated substance indeed.  Did you know that honey isn’t just a sugar?  It actually contains protein, iron, important enzymes, and Vitamin C.  And, as opposed to sugar, humans are not inclined to over eat honey.  It doesn’t affect your body like the drug of sugar does—making you crave more, the more you eat it.

If I had to rely on only four foods in my food storage, honey would definitely be one of the key players.  (Because I know I’ll get emails on it, the other three foods would be powdered milk, salt, and wheat.)  If I can get my hands on Snow White honey, I do at every opportunity.  It should be stored in its granulated or crystallized state until ready to use.  I also like using the Blue Chip Foods brand of their powdered honey.  It’s a bit more convenient to use in my recipes when I’m in a hurry and I don’t use nearly as much of it as I would sugar.  (Usually about only half to a third of the amount of sugar a recipe calls for.)  I recommend that you only store raw honey, not processed honey.  In actuality, processed honey is more at risk for botulism in all ages.

Do I have an ulterior motive in writing you about honey today?  Well, the Swine flu has been on my mind, of course, and I’ve been studying alternative uses to aid in the spread and ill effects of Swine flu.  It’s interesting to discover that there is a unique honey called Manuka honey that is made from the flowers of the Manuka bush in New Zealand.  This particular honey has been researched and is believed to have a special component which helps fight “super bugs” which are resistant to many types of antibiotics.  While I’m not suggesting that you all spend hordes of money on the internet to obtain Manuka honey, I am suggesting to incorporate honey into your food storage supplies because of its tasty adaptation in any recipe that calls for sugar as well as the safe medicinal effects it has on the body.

One caveat here.  As a general rule, honey should not be fed to a child under the age of one year old.  Their immune systems aren’t able to handle the pores inherent in honey and could contract botulism.  However, beyond that you will find honey to be an effective laxative, stomach ache cure, and aiding against colic as well.

Here are some medicinal honey recipes:

Hehehe, honey was the very first thing I purchased when I began my food storage, I have several gallons socked away now. We used to keep bees so I grew up on fresh, raw honey.

It is funny to me about babies and honey because that is only a recent caveat (well, last few decades). I was an incredibly fussy baby and my parents took my pacifier, dipped in in honey and whiskey and I calmed right down (go figure!). Two things anyone would say NEVER to give a baby! I blame them for my drinking habits today ;-)

I agree about the honey and babies thing. But I have to be responsible.

I've been using honey for years and it really does help with my allergies. Though each time we move there is a bit of an adjustment period until I find a source for local honey.

I've been adding extra to my stores as well as I can afford it.

Personally I wouldn't spend the money on processed except in the little teddy bear containers for cereal. I always obtain the raw otherwise. I really keep an eye out for sales. You can find a local bee keeper and get the VERY best prices that way. You can even obtain it in 5 gallon increments direct from the beekeeper. A gallon can run you about 30 bucks, but I've been able to get a bit better by buying in 10 gallon increments directly from the beekeepers.
Honey can be stored in just about anything that is clean and sanitized so you don't need to worry about that. You can

you really are SuperMom. :-)

Couple questions: What's a fair price for raw honey? What are some of the differences in how it is stored (I have access to honey in large plastic buckets or 1/2 gallon jugs, etc.)? I've noticed processed is cheaper than raw. What benefit is there to processing honey (especially if it kills the value)?