Last weekend I wanted to create a recipe in which I could successfully use wheat pasta as a grain in our diet. My husband tends to be just as picky as any of the kids I know when it comes to eating “healthy foods” so when he declared the culinary creation one of his favorite top 10, I was thrilled and relieved.  Relieved because it meant that I wasn’t going to have to eat the leftovers single-handedly, and thrilled because it was an easy one for me to make.  I’ll be sure to share the recipe with you down below. Before I do that though, I wanted to clear up some of the confusion that folks have about how much wheat they should store and what they should be able to do with it. So here goes.

Grain in your Preparedness Pantry

For starters, understand that a year of preparation supplies is my minimal benchmark. The most basic way to say why I use such reasoning is because a cursory look at all potential “disasters” would require at least a year in order for society to get back on its feet. A major earthquake, financial collapse, pandemic, flooding, and even unemployment in today’s market, is highly likely to require a year to cycle through the healing steps. As such, I recommend that everyone supply themselves with a year’s supply of necessities such as food, water, medical needs, clothing, etc.

Today, I want to take a look at just one component of this preparation, and that is your grain supply. Each person needs at least 300 pounds of grain supply for a year. I always say to have that much on hand regardless of the age of the persons in the household. The reason being is that you never know when you’ll be using those supplies, and you never know what you may elect to use in order to aid others as well. So instead of trying to analyze what your 3 year old may need now, just play it smart and have enough in the event your 3 year old turns into a 16 year old before you have time to change the amount of your supplies. 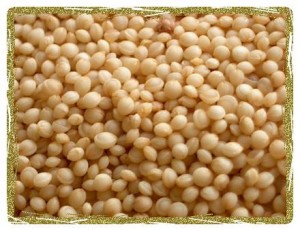 Understand that grain preparedness can take on all different kinds of forms.  Wheat is the first grain that folks usually think of first , but remember that alternative wheat grain items such as quinoa, millet, and amaranth, are viable substitutes. Also keep in mind that if you are ever required to use your supplies exclusively, VARIETY is one thing for which you’ll be grateful. So mix things up a bit now. Grains include oats, pasta, cornmeal, rye, flaxseed, any type of flour, rice, barley, and corn. You could even supplement your grain supply with things like baking, pancake, bread, and muffin mixes as a part of your 600 pounds.  Out of all of these recommended grains though, wheat has the longest shelf-life, the most stable nutrition, and the most adaptability.  As such, I suggest that you make yourself as familiar with using it as possible.

Culinary aspects to your grain

There are 4 culinary aspects that I encourage everyone to learn to do with their wheat supply. One is to learn how to make pasta from scratch. This means that you’ll need to invest in a hand operated pasta maker so that you can quickly and easily make pasta such as ravioli, linguine, and spaghetti with it.  Wheat pasta tastes a bit different that regular pastas, so for starters you may want to expose your family to some wheat pasta dishes. There are several commercial wheat pastas that I have been easily able to use in my regular pasta dishes (including the one I made last weekend). 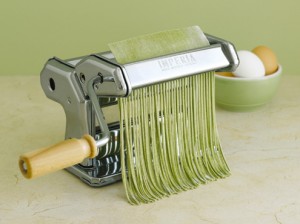 Next, I would make sure you can master making at least one type of bread with your wheat or other grains—be it rolls or bread loaves, or even just scones.  Sandwiches, and slices of bread can easily turn a “barely there” meal into a wonderfully memorable and satisfying one.  Keep in mind that the more fiber you have in your recipes, the more satisfying for a longer period of time they will be. In other words, having high quality meals full of fiber could actually reduce your need for a lot of other supplementary foods and could even reduce the number of meals per day you need. This kind of food also brings with it more energy and significantly better health.

Which reminds me of another aspect of using wheat as your main source of grain.  You must introduce it into your diet now. Don’t wait until a scenario in which you have to live off of it. If you do, you could very easily cause dehydration, painful constipation, and even death if your body is not already used to high fiber in the diet. If you’re just now venturing into the use of wheat and high fiber into your meals, start with one serving each day of high fiber, then increase it to two, and then to three. You should be fine after that. Be sure that you drink PLENTY of water with this kind of a diet too. The fiber can only do its job if it’s accompanied by plenty of water, at least two quarts of drinking water every day per person. 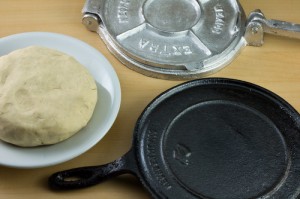 The next culinary skill I would recommend is making homemade tortillas from the grain in your pantry.  Tortillas are a great carrier for a variety of foods including salads. They are fairly simple to make, but the right tools and a little bit of practice will create a stress-free occasion for you later down the road. It’s easier to make them if you have a tortilla press; otherwise you’ll have to use a whole lot of physical energy getting them thin enough with a rolling pin. Besides, a tortilla press doesn’t require as much work space as a rolling pin would. I recommend that you do a search on The Food Network’s site and get Alton Brown’s recipe for tortillas. They turn out perfectly every time.

Lastly, I suggest you learn to use your grain to make your own pita bread.  Pita bread is very easy to make and it can be used as an alternative to bread in so many different ways. A piece of pita bread can accompany a meal or it can be the main part of the entree. You can easily make pita chips or large pita breads to stuff with a combination of sprouts, dressing, and seasoning. Yum!  Pita is also a good substitute for a pizza crust with only a fraction of the time to make it. Pita dough doesn’t require as much kneading, rising, and cooking time either. Remember, the easier something is to make, the less stress and the more energy you’ll have; out of all of the things that you need to prepare to conserve, your physical energy is at the top of the list.

Enjoy this recipe! My husband is already asking me when he can have it again.

(As you can see, all of the items in this recipe are easily found in a long-term pantry. This recipe can also successfully be cooked in a Solar Oven)

1 jar of your favorite spaghetti sauce (about 26 ounces) 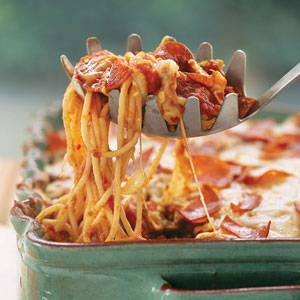 2 cups plus 1 tablespoon of grated cheddar cheese (sharp cheddar is the best, but I also like Colby Jack, and Medium Cheddar)

½ cup of sliced pepperoni, cut in halves or quarters

½ cup of beef broth (I like to make this with the Shirley J Beef Broth combined with ½ cup of the water I used to cook my pasta in.)

Cook the pasta according to directions (the thin spaghetti works best for this recipe). Drain.

While the pasta is cooking, either brown or warm up your ground beef with the minced garlic and the onion seasoning. If it’s too fatty, be sure to drain off some of the fat before adding the seasoning.

In a large bowl combine the cooked ground beef, pasta sauce, Universal Sauce, beef broth, 1 cup of the grated cheese, and 1/2 cup of the parmesan cheese. Mix gently to incorporate all flavors throughout.

Then add the drained, cooked pasta. Mix gently and then pour ingredients into a 9 x 13 baking dish.

Top with the pepperoni and sliced black olives. Then top with another cup of the cheddar cheese.

Remove from the oven and then top with the remaining cheeses. Serve and devour!

Serves 6. This recipe is easily doubled and tripled. You can also make it successfully without the pepperoni or black olives. Use your preparedness pantry grain now and you'll be happy you did.

I'm trying to do the same introductory method with a lot of folk. Well you got all those wheat berries now what? Please do not go from strait into whole wheat or beans without some acclimatizing. I like 1/2 and 1/2 split on breads an stuff. You do not want your bottom dictating your life at any time. Plus you need to stay healthy and proactive. Introduce whole wheat slowly in a diet.

I've also heard that it's actually healthier to use half ww and half white flour. You still get the nutrition from the ww but with less phytic acid.

Do you have a preference on what kind of wheat you use? How do you know what wheat to use for what? I have heard so many comments on whether to buy hard red wheat or hard white wheat that I don't know which kind to buy.

Sue, a couple of recommendations. First of all, I'd do a search on wheat here on the site. I've written about your question in several articles. Secondly, you can get more indepth training about wheat in our Wonderful World of Wheat class. Lastly, I'll just say that the Hard Red Wheat is the most hardy. I use it in everything including pastries. I also use the hard white wheat, but it's a bit more fragile.

600 # of grain per person per year. I'm not saying that is wrong its just a lot higher than I've seen on the internet. I am doing 300 # of grains plus adding in pastas and other types I missing something on a basic prep? Should I change my prep set up? and increase grains bought. I do a lot of pasta, rice and other starches/carbohydrates.

Ok. With all of you guys questioning me on the amount of wheat, I was second guessing myself. So I double checked. Yep...300 pounds per person, so 600 pounds for me and my hubby...And then it hit me! I told you all the 600 pounds for my hubby and I, not the per person! SORRY! thanks for keeping me on my toes!

okay I'm cool with that I count rice and outside of that balance.

I'm working very hard for 2 years on everything for myself. I am trying to build a 3 month food program for my idiot and oblivious members of my family with some help from my Mom. I used the Mormon basics as a base line do we need to to add to it? I think I'm fairly solid on basics just I do need some base lines on products. No biggie on TP or other stuff. I thought I was good on grain via the Mormon checklist and now you double down. Is it a nice to have or a have to have?