Before I get to the recipe, I wanted to address one other quick matter. There were several of you who wanted to know more about the discussion I engaged in with my friend the other day. Well, this Saturday is your chance. Be sure to tune in to The Preparedness Pro Radio Show as we discuss “Corpus Delicti”.  The three words “injury, loss or harm” have never meant more to your freedom and independence. This isn’t a loophole we’re talking about, Folks. This is right there in black and white, so be sure to tune in!

Now for the recipe...

Last night I had the privilege of making a meal to take in to a friend who had just delivered a baby. To be frank, yesterday was a bit of

a “low charge” day for me and I wasn’t feeling all that ambitious when the time for dinner making rolled around. As such, I decided that instead of making something new, from scratch, to instead come up with a way to use my leftovers and excessive amounts of other foods that I already had on hand to provide a good meal for a family of 8.  Usually, that would mean a casserole, but I had a different kind of challenge in mind. I wanted something that would make use of the several rolls of Pillsbury Crescent Roll dough I had in the fridge, as well as the remaining rotisserie chicken. (I bought 12 of the crescent roll mix during the filming of TLC’s Extreme Couponing episode for only .28 cents each.)

So, I percolated on an idea. Though my husband teases me about being “fearless” in my cooking—never afraid to try something new on someone when the results could be disastrous, it looks like I still managed to escape creating a reputation as the worst cook in my neighborhood. (He will never let me live down the fact that I’ve made food for two wedding receptions using un-tried recipe creations. And yes, they did turn out great. *grin*) As it turned out my idea pulled off well, even with the teenage eaters in the family, and my friend now wants the recipe.  So I thought I’d share it with all of you. You can easily adapt this to any bread or roll dough you might be making from scratch.  And keep in mind that Swiss cheese is one of the cheeses that are hard enough to wax and store. Best of all, remember that the Shirley J Universal Sauce has a 30 year shelf-life and replaces all of your "creamed of" soups. Enjoy!

(Sorry I didn't have the foresight to take pictures, but the delighted text message I got from my friend shortly after the dinner hour was well worth the risk. *grin*)

½ cup of finely chopped, ham (can be lunch meat or ham steaks)

Mix together the chicken and ham in a bowl until well mixed.

In a separate bowl, mix together the finished Universal Sauce and the Pizza Pasta Seasoning.

Spray a large cookie sheet with a non-stick spray or wipe down with Olive oil. 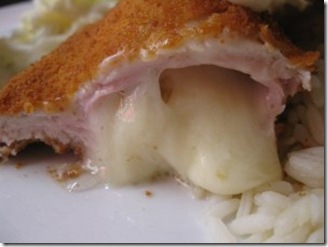 Separate the crescent roll dough into FOUR rectangular shaped parts per package. (this will be two triangular wedges together to form the rectangle) Making a total of 12 rectangles.

Spread one tablespoon of the sauce mixture all over each of the rectangular dough pieces.

Then top with a thin layer of grated Swiss cheese.

Then top is about 2 tablespoons of the ham and chicken mixture, leaving about a ½ inch of the end of the dough uncovered with the meat mixture.

Starting from the end with the meat mixture, carefully roll the dough with all of the ingredients in it and come to rest on the end which isn’t covered with the ham mixture.

This will loosely resemble a jelly roll. Place the roll with the seam side down on the prepared cookie sheet. Repeat for all 12 rolls.

Top each roll with a slice of the Swiss cheese.

Cover the cookie sheet with foil and bake at 350 degrees for 20-25 minutes. (Following the package cooking directions for the crescent rolls will result is doughy, uncooked insides, so you need to cook these lower and longer in order to cook all the way through.)

Each roll is plenty to serve each person and is a complete meal when served with a yummy vegetable or tossed salad.

I have a question. Recently it has come to my attention that Mountain House uses Chinese products. The Chinese have approached Morning Moo in regards to selling them powdered milk. Are you privy to information about the origin of all of those prep foods that you are using? Between the melamine and now the nitrate mess not to mention the addition of some kind of leather powder to milk it appears that the Chinese people prefer to drink imported milk themselves rather than their domestic supply. Why would anybody in the USA choose to drink tainted Chinese products rather than milk produced right here in this country?

When it's a matter of life and death, I can't afford NOT to research every freeze-dried brand I purchase.

What is the episode for the 16th on Corpus Delecti? I see several things listed, but not one points to your discussion (that I can figure out). The recipe above sounds absolutely delicious except I don't use Shirley J sauces. (I want to try them though) I'll have to figure something else out. Thanks for the recipe, help and your blog. Great stuff!

oh, and I agree with Lois, I have been more determined to buy food grown, processed and packaged in the US. WHen an Oregon company decided to close their two plants that made pickle relish and move production overseas - i.e. they grew the cukes here, shipped them to China, it was processed, bottled,and shipped back, I stopped buying ANY brand of relish. I make my own. I buy direct from the farmer what I can't grow myself, can it or do without. I'm doing that with most foods. It's amazing what you can learn to do without, what isn't as necessary as you thought. I want SAFE food, so I get to know my farmers at the farmers markets, go to the farms that I know are organic, I know I'm a part of the SOLUTION, instead of the problem.

We wouldn't have as much unemployment in this country (hopefully) if these irresponsible, money hungry, corporations would keep their production here. We have to hit them where it hurts, and that's in the pocket book. Hopefully, I made a dent (smile).

Thanks Kellene for all you do.