Firearm aficionados often like to build their rifles from the ground up so that they can customize the features of each part of the gun to their specifications. Many also like to purchase rifle parts so that they fly under the radar from the prying eyes of government.

The AR-15 Lower Receiver is the one part of the firearm that is considered the “operating part which means that one cannot just order it online and have it sent to you directly; instead it needs to be transferred to you through a local FFL (Federal Firearm License) dealer. It’s the part of the firearm that has the serial number engraved and it houses the trigger group and  hammer group.  A rifle is inoperable without this portion of the firearm and as such, the purchase of it requires compliance with the same state and federal laws that would apply if you were purchasing a fully assembled firearm. In other words, it’s something worth getting excited about. It’s my kind of “bling” nowadays. As such, you can imagine my response when Aero Precision asked me if I’d be willing to review their AR-15 Lower Receiver. Duh! I literally told them “you had me at “AR”; who wouldn’t want another AR15 Lower Receiver in their collection, right? *grin*

Excitement aside, I did have some hesitancy because even with the prospects of gaining another Lower, I wondered how well this review would go; I mean have you seen how many different manufacturers of AR15 Lower Receivers have sprung up out of nowhere recently? It seems someone is stamping out new manufacturers as fast as those new manufacturers are stamping out new Lowers. And unfortunately, I have seen a lot of garbage Lowers coming out from new manufacturers that just don’t understand how to make a quality Lower Receiver because the manufacturer heads come from a “shop mentality” and are just looking for new revenue streams in a down economy. But don’t you worry about me. I didn’t let that get in my way. Hee hee

Aero Precision offers several different coatings on their Lower Receivers, so the first step was to select which Lower Receiver I was going to review. Given the options of Black Anodized, Desert Cerakoted, and Black Non-Anodized, all of which are stripped (meaning that it is a bare Lower Receiver, with no parts installed), I opted for the Black Anodized. Why? Well, it isn’t called “BRD” (Black Rifle Disease) for nothing. Hee hee. In all seriousness, though, I do prefer an anodized Lower though I would have reviewed the Desert-colored Cerakoted version just the same. I also prefer to start with a stripped Lower because doing so enables me to build it up with my choice of parts, which can range from the basic mil-spec package to a fully decked-out package with every customization (of which there are literally hundreds) known to the AR-15 world.

When it finally arrived, I rushed over to pick it up, eager to begin assembly and testing. You would have thought that I was going shoe shopping by the way I responded after learning that it had finally come in. I paid my transfer fee and tax, and off I went—clearing my work calendar for the rest of the day.  Yup, you read that right. I played hooky the rest of the work day just so that I could play with the new Aero Precision AR-15 Lower Receiver.

I keep a few AR-15 Lower Receiver parts kits on-hand because… well, because I’m the Preparedness Pro, and I like backups to backups. So, out of the safe came a Lower Receiver parts kit – this one was a Rock River Arms kit, which is standard mil-spec – laid out a white towel, with all of the parts on it, and began my inspection. All parts present and accounted for and broken out into the various control groups, I now turned to the box holding the Aero Precision Lower Receiver.

m stock, which is then machined to correct specifications. This allows for a lightweight Lower Receiver that is very strong and easily able to withstand the forces typical of both .223 and 5.56mm ammunition (as well as many other calibers), both of which I use in AR-15s on a regular basis.

Installation of the Lower Receiver parts kit is simple and easy. There are several tutorials online for those that have never done it or need a refresher course, so I won’t go into great detail here (not the point of this article), but put simply, it’s a matter of installation by the numbers.

2. Complete the hammer group using the hammer and hammer spring, then install i

6. Install the bolt catch, with its associated spring and plunger, and retain using a roll pin,

7. Install the forward take-down pin, with its associated spring and detent pin,

rear take-down pin, with its associated spring and detent pin, the buffer retainer and spring, then install the extension tube, being careful to cover the rear take-down pin spring with the locking ring, and being careful to cover the edge of the buffer retainer with the edge of the extension tube, lastly tightening the castle nut to keep everything in place, and finally, 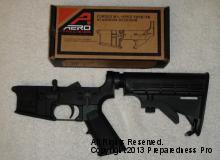 9. Insert the buffer spring and buffer, making sure they lock correctly behind the buffer retainer.

The installation of the Lower Receiver parts kit completed, I lightly oiled the trigger control group and inner surfaces, and installed a Bushmaster XM15-E2S Upper Receiver with M4-profile barrel to complete the package.

A few function checks to make sure everything seemed to be operating as expected, and I was ready for the range. Care to come along? 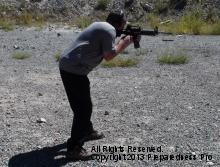 After I put a few magazines through the firearm, my hubby informed me that it was his turn to run it through its paces. When I balked at his audacious request he threatened to sing the entire song, “Cross My Heart” in a falsetto opera voice.  I relented—I just couldn’t do that to George Strait. (Ladies, don’t you just hate it when your man wants to play with YOUR toys? *grin*) A few hundred rounds later, with a lot of tactical drills and defensive shoot-and-move drills mixed in just for fun, and he finally handed it back to me, complete with a smile on his face.  Obviously it held up to his highbrow firearm expectations—which is not to be taken lightly.

Thanks Aero Precision. It was indeed my pleasure to review this product.

Kellen, is there anyway articles that you have or could refer me to on Muslim beliefs. I feel terribly uninformed in this and am looking for more information.

Thank you, and I often check in to read your posts, I find them the best researched and most inclusive of any on the net. Thanks

What knowledge of Muslim beliefs has to do with prepping is beyond me - and, I'll bet, Kellene. Try your local library and on-line.

I think that there's some merit to understanding the culture of a potential enemy, but I haven't gone very far in depth into this topic as I have sooo much more I want to learn that I believe has priority over that one. The library though would be my first choice or Amazon. :-)

Just like you I get so pumped when I order a lower and it has arrived at the dealer. Aero makes some of the best upper and lower receivers on the market in my opinion. They also make upper and lowers for a lot of companies most people don't know that. I think they have the tightest mil-spec products on the market. Very nice right up Kellene. Your rifle turned out sweet by the way.